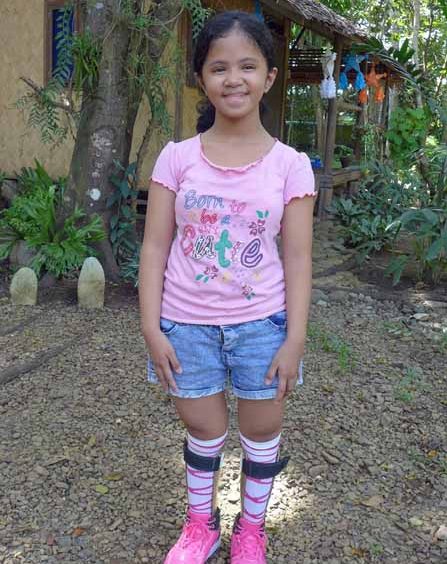 Jaira’s condition did not stop her from going to school.

Jaira was born with Orthogenesis Imperfecta, also known as brittle bone disease. It is a genetic disorder that is usually inherited from the parents. Her parents were cousins, and their family did not approve of their marriage. Due to poverty, the mother eventually bowed to pressure and left to work abroad. Jaira stayed with her father and other relatives helped to raise her.

Brittle bone disease results in bones that break easily and this happened to Jaira repeatedly as she was growing up. She was first checked in Bahay Hawak Tayo Lakad Inc. (BAHATALA) by when she was a year old. Her parents were counseled about the consequences of Jaira’s delicate condition. She broke her femur (thigh bone) at age 4 when she was starting to get more active and was treated conservatively by Dr. Socrates; she was put in skin traction at home for a month. As she grew older, more fractures and sprains followed. Walking was slow and difficult but fortunately, Jaira’s condition did not stop her from going to school. The family lives in a small village, about two hours’ drive north of Puerto Princesa.

In 2017, Bahatala was doing an outreach clinic in her village and Jaira was seen again after a long time. She was found to have recurrent ankle sprains and fractures of the foot. The deformity of her lower legs was more pronounced but fortunately, the muscles’ strength was within normal limits.

Jaira excels in her studies but walking to the local primary school had become a difficult struggle everyday. It was fortunate that the outreach team came with its visiting orthotic specialist who assessed Jaira and suggested she could do well with a custom-made brace called “Ankle Foot Orthosis” or AFO. Jaira came to Bahatala’s workshop in Puerto Princesa to be measured for the brace. She was one of the first recipients of Bahatala’s newly developed orthotic technology. Jaira’s AFO was fitted, and we saw that she was walking a lot better. Her curved legs were made a bit straighter by the AFO and it made lifting her leg easier when walking.

Jaira will have to live with her disabling condition but with the help of the AFO, she is enabled to move better and freely, allowing her to continue with her schooling and be more active in the community.

Good to Note:
BAHATALA or Bahay Hawak Tayo Lakad Inc. is a pioneering initiative of the late Dr. Jose Socrates which responds to the rehabilitation needs of persons with disability.