Determination is Key to Success

HomeDetermination is Key to Success 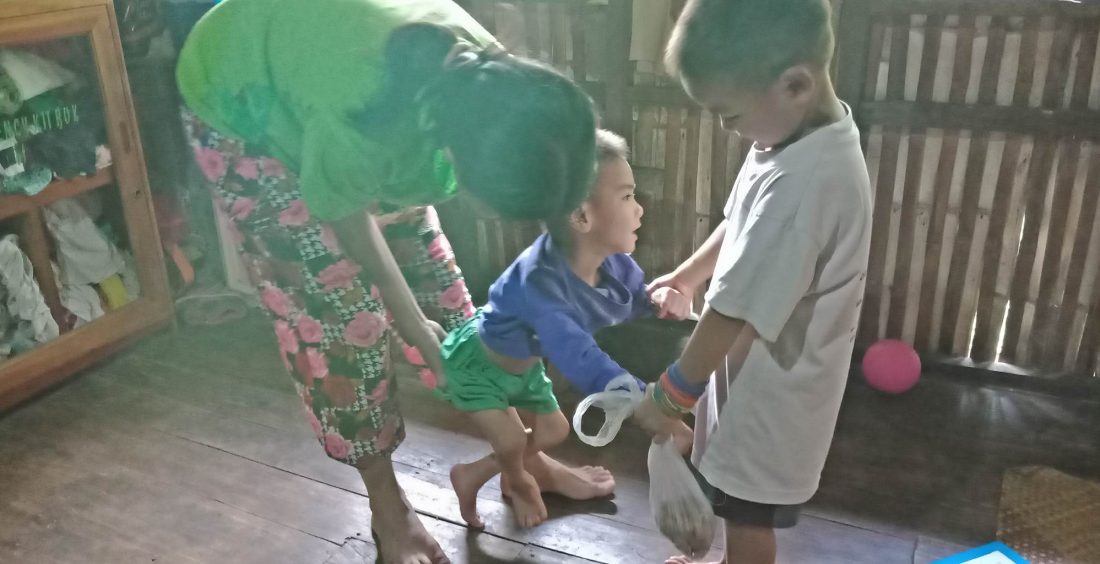 It is Jhan’s determination that keeps on reminding Annaliza and Kristopher to implement the home program activities everyday.

Five-year-old boy Jhan Legaria is the son of Annaliza, 27 years of age. He has an identical twin brother named James.

Before, Jhan cannot stand and lift his head. He cannot utter any word but he understands and communicates by nodding and smiling.

He always stayed at home with his mother while his twin brother attended school as a Day Care student. He has a supportive stepfather named Kristopher who stands as the breadwinner of the family. His stepfather works as a fisherman earning 200 per day and sometimes works as a farmer earning 3,000.00 per quarter.

When Jhan was six months old, his mother noticed that Jhan cannot crawl and his arms and legs were stiff which were opposite to his twin brother.

“We felt that there’s something wrong with Jhan. We thought he was just delayed compared to his twin brother. I convinced myself that my child is normal and just the same with his twin brother,” explained by Annaliza.

Due to the meager income of the family, Annaliza and Kristopher weren’t able to consult a specialist.

In February 2017, Jhan and his parents got a visit from a Barangay Health Worker who was conducting a survey of children and youth with disabilities in the Barangay and Jan was referred by the LGU for possible admission to NORFIL’s CBID Program.

“A Social Worker from NORFIL visited and oriented us about the CBID Program and our roles and responsibilities in Jhan’s development. When NORFIL assessed Jhan, it was the first time we’ve heard of Cerebral Palsy,” said Annaliza.

Two months later, NORFIL facilitated his medical check-up at Perpetual Succour Hospital and it was confirmed that the child has Cerebral Palsy.

NORFIL’s Physical Therapist provided Jhan and his parents with a set of home-based interventions in managing the stiffness of the child’s muscles.

Jhan worked very hard in stretching his arms on his own. Despite the difficulty, he still made his best and the mother noticed that Jhan was in pain in doing all the exercises at first.

After four months of implementing the home program exercises, Jhan can now lift his head gradually, can crawl alone, and can stand with support from something hard like wooden fence and wall.

For now, the parents are consistently and perfectly attending all the trainings conducted by NORFIL. They believe that it really helps them to become responsible parents for their children, especially for Jhan. Jhan’s stepfather has attended all the trainings facilitated by NORFIL and he helps Annaliza in implementing the home program activities for the child.

The couple is full of hope and determination to do all the possible actions that could help Jhan’s situation because they believe that Jhan could live a life like other children.