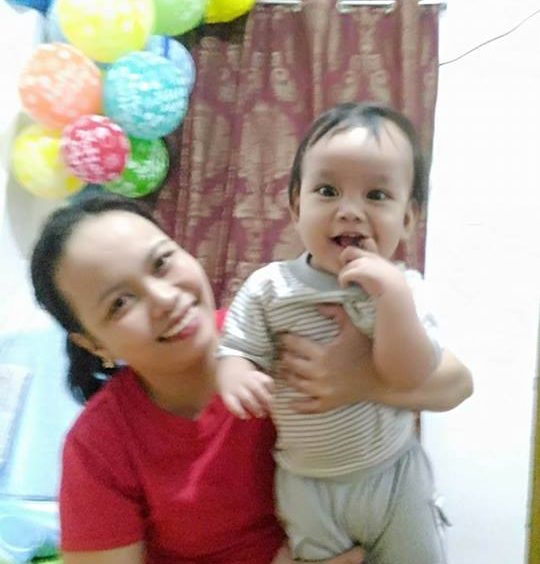 Seeing how fast Vince is growing up, she was at peace despite their temporary separation and was even determined to work harder and be with her child again.

Vince was 2 months old when placed in the foster home for temporary placement while his birth mother, Jane returned to her work to save money before going back to their hometown. In their hometown, Jane has two older children ages 6 and 8 in the care of her mother who is 64 years old. Jane is supporting them by working as a house helper in Manila. Thus, she decided to place her youngest child Vince in a foster home while she continued to save up for her plans to go back to their province and be reunited with her children.

Jane took the initiative in knowing her child’s condition while he was in the foster home. She was assured that Vince is well taken cared of and never experienced illness while in the foster home. Jane also made sure that she met the requirement of visiting her child monthly and brought him some clothes to wear. During the monthly visits, she was happy to see that her child was growing up well and was able to hear the child’s developmental milestones from the foster mother. She felt thankful to see that her child experienced family care while she continued to work and save money. Seeing how fast Vince was growing up, she was at peace despite their temporary separation and was even determined to work harder and be with her child again.

Despite the prolonged stay of the child in the foster home than initially planned, Jane was resilient in looking for other options to be reunited with Vince. She was able to secure help from her niece who has a stable income as well as a home and business in Cavite.

Meanwhile, close coordination with the concerned LGU was done by the assigned Foster Care Social Worker for the birthmother’s Parenting Capacity Assessment (PCA) and linkage for other possible support services such as helpful livelihood trainings in preparation for the child’s reunification with her birth mom. Eventually, after a favorable response to the birth mother’s parenting capacity was issued by the LGU, Vince was finally reunited with her when he was 10 months old.

Jane is happy and thankful that she was able to prepare herself for a new start while her child stayed in the foster home. As she said “Maraming salamat po sa tulong ng NORFIL Foundation, nagkaroon ako ng pagkakataon na maihanda ang aking sarili bilang magulang sa aking anak. Hinding hindi ko po makakalimutan ang tulong na ibinigay ninyo sa akin at sa aking anak at sa mga darating na panahon, babalik kami upang muling magpasalamat.” (English translation: Thank you very much for the help of NORFIL Foundation, I had the chance to prepare myself to be a parent to my child. I won’t forget the aid that you gave to me and my child; and even in the future, we will come back to give our gratitude again.)

Truly, there is no greater joy for a mother to be reunited and be able to share her love for her child.