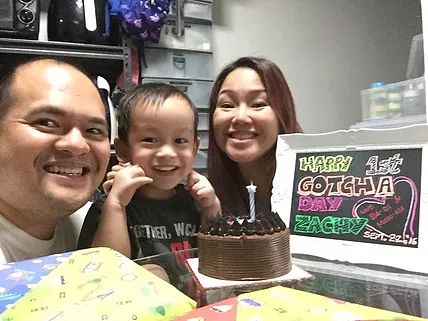 We were excited to start a family as soon as we got married. Like any newlyweds our age, it never occurred to us that something was wrong.

Jay and I had been fantasizing about our future children since we were dating. We both wanted a boy first whom we would call “Zachary”, then a girl we would name “Bailey”. In our talks, the personality that “Zachary” had was playful, boisterous, and affectionate.

We were excited to start a family as soon as we got married. Like any newlyweds our age, it never occurred to us that something was wrong. After 2 years of trying, my gynecologist suggested we get ourselves checked out. My doctor found nothing seriously wrong with the results but advised us to go ahead and do an Intrauterine Insemination (IUI). After 2 failed IUI’s in 2010 and 2011, we were told that the next best step is In Vitro Fertilization (IVF).

In August of 2013, we had another round of workups at St. Luke BGC’s Center for Advanced Reproductive Medicine and Infertility and were told that my Anti-Müllerian Hormone (AMH) levels (which gives a good indication of ovarian reserves) were that of menopausal age. I was diagnosed with “inexplicable infertility” and was advised to have an IVF immediately. Although we were still in shock at this unexpected turnout, emotionally and financially unprepared for the procedure, we decided to go for it right away.

I went through a month of fertility injections at maximum doses which as per ultrasound produced at least 3 viable eggs. All our hopes were pinned on those 3 viable eggs.  But alas, on the day of the IVF, the doctor could not find any trace of an egg. We were absolutely devastated.

We were then directed to seek the help of a well-known Chinese acupuncturist who specializes in cases like ours. I went to her weekly and drank the teas that she prescribed for a period of 6 months, but still with no positive results.

Although adoption was always in the plans as the next option, it was only at this time that we began to seriously discuss it. We knew in our hearts that we wanted to be a family. The minute that Jay and I decided to take the adoption route, we were lead to people in our lives who were in the same boat. We had the chance to talk to them, have them share their experience, and even visit orphanages to see the children and confirm our feelings about adoption.  Then finally we had a long discussion with Jay’s aunt about her experience with the adoption of her two children and the whole process that it entailed. We then strongly felt that our Zachary was in an orphanage somewhere waiting for us.

The application for adoption was challenging in terms of documentation requirements- an undertaking very similar to applying for a US Visa or completing requirements for a new job. Aside from forms and papers, the NORFIL social worker made a home visit, interviewed Jay and I together and separately, as well as our character references. We finally submitted our completed documents in April 2015.

Our case had already been presented twice in previous Matching Forums when we got the call about a possible match on September 14. Jay and I originally requested for a 6-8-month-old baby boy, with Chinese features since we both had Chinese ancestry. The child, we were told, was everything we hoped for, except he was already 16 months old. Our social worker sent 1 photo of the child and asked if we were willing to consider adopting him.

All she was allowed to tell us was that he was clingy, and loves music and colors. The second we laid our eyes on that photo, we knew he was our Zachary.

On September 16, we went to NORFIL for the presentation of his case file, though the details didn’t matter anymore.  Then the social worker told us that we could take Zachary home 6 days later.  We were totally surprised since we had been advised that it was the norm for orphanages to require adoptive parents to visit initially for 4-6 weeks.  We barely had a week to prepare, but we shopped and cleaned and made all the arrangements with happy, excited hearts.

September 22, 2015 is Zachary’s Gotcha Day. Though I’m glad we took a lot of videos, these will never quite depict the nervousness, the what-if-he-doesn’t-like-us jitters, the are-we-really-ready-for-this panic, and finally the overwhelming sensation that this baby BELONGS with us. Zachary was a tiny bundle wearing an orange onesie and immediately wrapped his arms around Jay to be held. We cried, he laughed, and we laughed with him. We took turns carrying him as we toured the orphanage and said grateful goodbyes to the people who nurtured him all through his young life. It made my heart overflow with love to see my husband with the Zachary we’d always had in our minds.

It took about 2 weeks for Zachary to respond to his new name, and another year before he called us “Daddy” and “Mommy”. He is as clingy now as he was when we first got him. He loves, even prefers to be carried.  He can sing along to his favorite songs, especially Journey’s “Don’t Stop Believing’”. He loves monster trucks, is easily distracted by YouTube videos, devours anything chocolate, and knows exactly what kind of cuteness to project to get what he wants. And while Jay and I continue to learn how to become better parents, we are also going through the legal process of adopting our little boy whose name means “remembered by God”. We feel that whenever we look at his angelic face.

Zachary is living up to the baby we dreamed of years ago:  playful, boisterous, and affectionate.  He displayed this to the court very well while I was being deposed on the stand and he decided to play with me, which amused the judge and prosecutor.  Jay and I are very eager to get the new birth certificate which will then make Zachary officially, legally ours in name. We hope that that part will be easier. In the meantime, we’ll enjoy every single moment with our sweet Zachy.