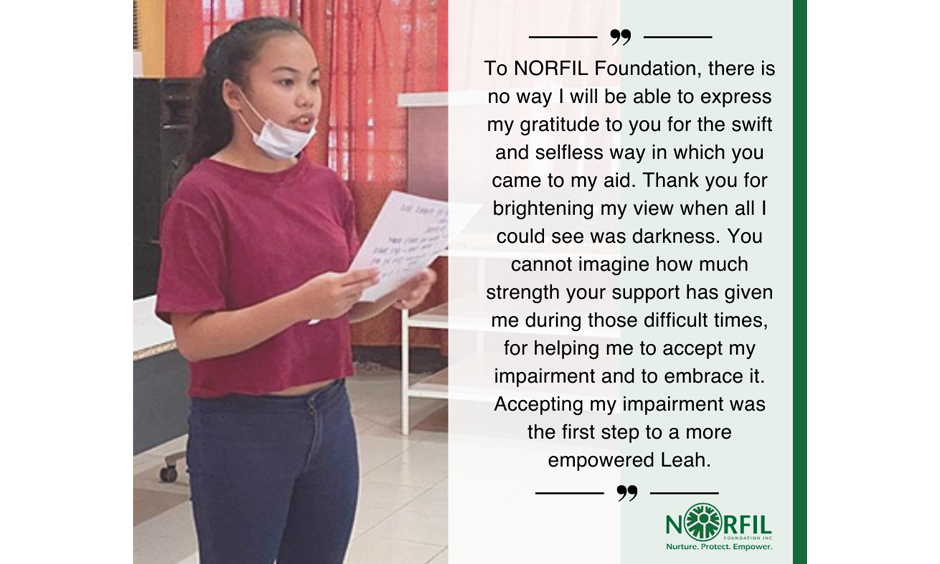 I am Leah, a student of NORFIL Foundation. I was 16 then when I had my first seizure attack, it took me months to reach a diagnosis of epilepsy. I’ve seen many neurologists, paramedics, and medical professionals in my journey, and have had lots of medical equipment strapped up to me. There were quite a few different tests, including the usual tests that you have when you have neurological incidents, like MRIs and CT scans. I’ve also had heart tests, ECGs, and I even spent a week in hospital for continuous monitoring.

They put an EEG – the one with little electrodes that they stick all over my scalp and monitored me on a video camera. Over the week, they made me slowly go without sleep. One day I had to have two hours less sleep and the next day it was a little bit more, and then there was one night I had to go a full 24 hours without sleep. They were trying to bring on a seizure: they wanted to get a really good idea of what happened in my brain during a seizure.

I kept seeing a neurologist every few months and playing with the many medications that are out there.

While we were finding the right medications, I had to cut back on a lot of activities, like swimming. That was really difficult for me; it meant I was less independent than I could be.

It was really hard for me, it made me depressed and worst it led me to self-harm because in my school, I was bullied, they called me names such as “patulon”. I remember the night when I attempted to commit suicide when I knew how much my medicine cost because I don’t want to be a burden to my family.

Earlier this year NORFIL invited me to attend a training about “Peer Counseling” at first, I was hesitant to attend the training since I’m not exposed to people with disability, because I, myself, still can’t accept the fact that I belong to the persons with disability. But still I decided to go. I participated in different workshops during the training. On that day I met youth with different kinds of disabilities and eventually they became my friends. There’s this one workshop that made a lot of changes in my life. It’s called “River of Life”. I used that opportunity to share my experience and my life struggle. I also used that workshop to express my thoughts about suicide but in private to a NORFIL staff. On that day NORFIL called my attention and talked to me in private and they advised me to ask for professional help and that they will help me.

I grabbed the opportunity when they told me that time about it because I was still sad and had anxieties. I don’t want to die but I also don’t want to live like this. When they knew about my story, they instantly recommended a therapist for me, so I was and still really thankful. During my therapy days, it made me scared, what if I’m not going to heal? What if things get worse? But luckily, I am becoming better from my illness and my mental health.